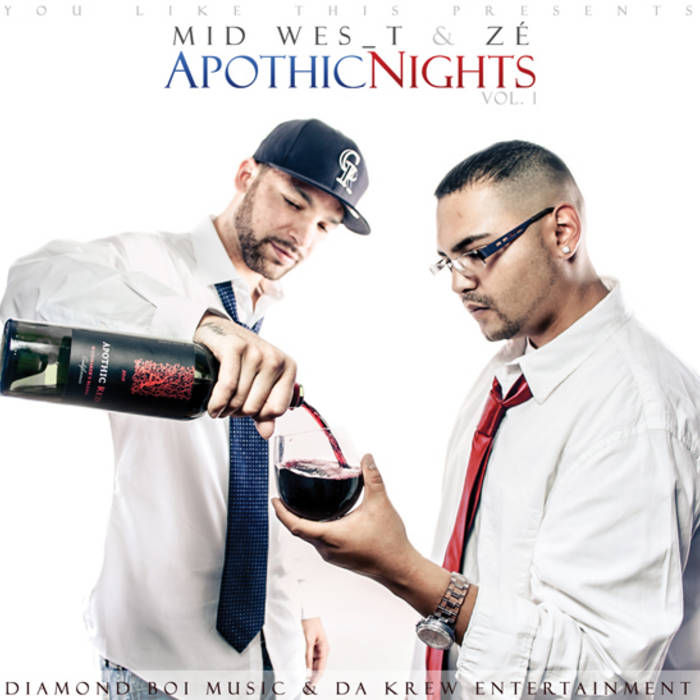 When Mid Wes_T introduced himself with the Diamond Boiz in 2010, it was immediately apparent that the combination was something special. That’s why it didn’t take long for a joint-effort to develop. This June 2012, Zé teams up with Da Krew Entertainment’s emcee on a project, two years in the making, built on long, Colorado nights in the studio drinking their favorite red wine.

Appropriately named, Apothic Nights (Vol. 1) features production from both teams heavy-hitters including Diamond Boiz own Dyalekt (Jay Class), DKE’s star producer TC Crook, and the artists’ favorite out-of-state composer, Oliver Grey (f/k/a Tech Groove). Not a lot of features found their way into the project, but those, notably by Quse London and singer Baby Jae, that did are well worth the promo. Neither Denver’s Zé or Chicago native Mid Wes_T are amatuers to the stage, and have performed together frequently with Diamond Boiz, opening for acts like Ice Cube, Nipsey Hustle, and more.

Apothic Nights, filled with bangers and laid back themes to keep your head nodding, will be available for free digital download on June 27th, 2012 but the real excitement starts on June 29th. That’s when Mid Wes_T joins Diamond Boiz yet again to officially release the project at Cervantes Masterpiece Ballroom, opening for Psycho Realm, Bambu, along with Hasan Salaam and Cadava Records. The night will include a
lowrider bike show presented by the Colorado Casuals, and will definitely be one to
remember but will in no way be the end of these Apothic Nights.